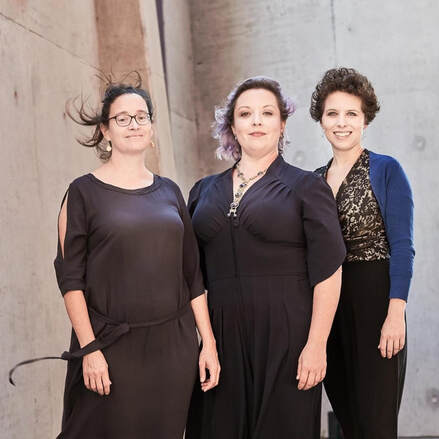 Image by Maurice Gunning, 2018
The Damselfly Trio - Liz Pearse, soprano; Chelsea Czuchra, flutes; and Lindsay Buffington, harp - is a mobile chamber ensemble dedicated to the music of contemporary composers and poets/writers. Continuing the work begun by The Jubal Trio, Damselfly is committed to commissioning, performing, and promoting contemporary chamber music for their unique instrumentation. To this aim, they have worked with a number of composers and poets from both sides of the Atlantic. Founded in 2017, Damselfly Trio is based in the US and Switzerland, conducting concert and educational activities throughout the US and Europe.

In recent seasons, Damselfly Trio has performed throughout Switzerland, Ireland, the UK and the US. Their concert appearances have taken them to a wide range of venues, including: Black Mountain College Museum + Arts Center, the Hugh Lane Gallery in Dublin, Queen’s University Belfast, Irish World Academy, Wild Atlantic Words Festival, Rehmann Museum, the Bank of the Arts in New Bern, NC, and digitally at the University of Liverpool. They have also been heard over the air on BBC Northern Ireland.

Upcoming collaborations include projects with Swiss composer Alfred Zimmerlin and poet Ingrid Fichtner, and Korean-Swiss composer Junghae Lee. Damselfly has also enjoyed a long working relationship with Pulitzer Prize nominee Ricardo Zohn-Muldoon, who has created new settings from his cantata Comala for the trio, as well as a new piece inspired by Juan Rulfo's epic text.

Damselfly’s largest project to-date is Buaine na Gaoithe, a 30 minute song cycle created by the Irish team of composer Ryan Molloy and poet Martin Dyar. After tours in the US, Ireland, Northern Ireland, and Switzerland, Damselfly Trio’s recording of Buaine na Gaoithe was released in July 2021 by the National University of Ireland.

In 2022-2023, Damselfly Trio's planned activities include concert appearances in upstate NY, Toronto, Chicago, Germany and Switzerland. In addition, they will record Zohn-Muldoon’s Songs from Comala. The trio will record their next album in 2022, featuring music by Ursula Mamlok, Ricardo Zohn-Muldoon, Alfred Zimmerlin and Junghae Lee.

Damselfly Trio has received support from an international roster of organizations including Arts Council Ireland, Aargauer Kuratorium, the Dwight and Ursula Mamlok Stiftung, and the Swiss Cultural Fund UK.

Lindsay is a versatile performer who thrives on playing in diverse musical styles. She enjoys an active freelance career in Switzerland and abroad, and plays regularly both as a soloist and with ensembles. She has performed with the 21st Century Symphony Orchestra, City Light Symphony Orchestra, Bach Ensemble Luzern, Bach- Collegium Freiburg, Sinfonietta Basel, Sinfonietta de Lausanne, Sinfonieorchester Liechtenstein, Mädchenkantorei Basel, among others. Recent years have included invitations to the Festival ZeitRäume in Basel, World Band Festival Luzern and the soundSCAPE Festival, Italy.

An active chamber musician, Lindsay is the co-founder of 3 chamber music ensembles: Deux en Harpe, with harpist Céline Gay des Combes (2008), and Cochlea Duo, with flutist Chelsea Czuchra (2013), and the Damselfly Trio, with Chelsea Czuchra and Liz Pearse, soprano (2017). Together with these chamber groups, Lindsay has undertaken several concert tours in Switzerland and abroad. Past tours have taken Lindsay to Ireland, the UK, France, Italy and the USA. Deux en Harpe performed a live concert on Radio RTS1 in Lausanne, and has performed at venues such as Victoria Hall, Manège d’Onex, “kultur i de braui” in Hochdorf, and Bargemusic NY. They were invited to festivals such as “le bois qui chante”, “Orgues, Musiques et Cimes” and “Harfenfest Luzern”. The harp duo released their CD, “Pas de deux harpistique,” in 2011.

In addition to her work as a performer, Lindsay teaches harp at the Musikschule Horw and Musikschule Hochdorf in Canton Luzern, Switzerland. In past years, she has been invited to teach at the harp camp “Vac'Harpes”, and at the Coastal Carolina Harp Society “Wilmington Harp Day”. She has presented workshops on composing for the harp at the soundSCAPE festival in Italy and at Maynooth University in Ireland.

More about Lindsay
Chelsea Czuchra -Passionately dedicated to the flute and new music in particular, Chelsea Czuchra is an active performer and educator in Europe and North America. In addition to working as a freelance orchestral player, Chelsea has diverse experience as a collaborative musician in chamber music, various world music traditions and improvisation.

Chelsea held a Winter Residency at the Banff Centre for the Arts in 2020, and in 2018 with Damselfly Trio at Avaloch Farm Music Institute (US). In 2015 and 2016 Cochlea Duo was guest ensemble at the soundSCAPE Festival in Maccagno, Italy. An advocate for arts education, Chelsea frequently performs for outreach programs in the US and Switzerland. Since 2018, Cochlea Duo and Damselfly Trio have given outreach concerts as affiliate artists with the Carolina Chamber Music Festival in eastern North Carolina.

Based in Switzerland, Chelsea was raised in eastern North Carolina and is a proud graduate of UNCSA, the NC Governor’s School, Purchase College and CalArts.
Liz Pearse - Finding joy in variety, Liz Pearse is a musician of many pursuits. Liz began her exploration of the endless possibilities of the voice after a childhood spent playing any instrument she could lay hands upon. As a performer, her uniquely colorful and versatile voice has led to performances of wide-ranging works from medieval to modern, and though she is known as a specialist in contemporary vocal repertoire, she also deeply enjoys a well-aged song. Liz has recently begun a long-term project commissioning and performing works for singer at the piano (though she still enjoys the collaborative process!), and presented her second full-length recital of such pieces, a celebration of the 100th anniversary of Francis Poulenc’s Le bestiaire featuring newly-commissioned animal portraits, in 2019. When it's safe to do so, she will be thrilled to collaborate with other live performers again. . .
​
Liz has a special affinity for music post-1900. As a soloist, her recent projects include multiple performances of Pierrot lunaire, touring Olivier Messiaen’s Harawi, electroacoustic programming including Philomel, and on-going commissions dedicated to the creation of works for self-accompanying soprano.

In addition, Liz forms one-quarter of Quince Ensemble, a treble quartet dedicated to the creation and performance of contemporary vocal literature. With Quince, Liz has performed on tours of Morton Feldman’s Three Voices, David Lang’s love fail (including the work’s Polish premiere), and on numerous collegiate residencies and festivals from coast to coast. Quince’s third album, Motherland, was released to critical acclaim by New Focus Records in April 2018, and they recently released love fail on Innova Recordings.

In previous seasons, Liz has had the privilege of performing at the Lucerne Festival, singing Berio's Coro under the baton of Sir Simon Rattle. She also performed at soundSCAPE Festival in Italy, where in 2013 she shared the distinction of "Outstanding Performer" with her brother, conductor and percussionist John J. Pearse. Other chamber and solo engagements have included the Toronto Electroacoustic Symposium; (le) poisson rouge; Omaha Under the Radar; Kerrytown Concert House; Baldwin Wallace University; and Constellation Chicago. Her opera credits include Lyric Opera Kansas City, Michigan Opera Theatre, Toledo Opera, and Opera in the Ozarks, in addition to many performances with Indiana University and Bowling Green State University Opera Theatre.

Liz recently received her Doctorate in Contemporary Music from Bowling Green State University in Ohio. There, her studies included research on the prevalence and incorporation of contemporary repertoire in the collegiate voice studio, and her dissertation “BECAUSE THERE IS NO BASIS FOR COMPARISON”: THE SELF-ACCOMPANYING SINGER AND ROGER REYNOLDS’ SKETCHBOOK FOR THE UNBEARABLE LIGHTNESS OF BEING was presented in October 2018.

Liz's doctoral recitals included Messiaen's Harawi and an electroacoustic program, among a diverse range of art song and chamber programs. She also won both the Dr. Marjorie Conrad Art Song Competition and the BGSU Competitions in Music concerto competition while at BGSU, and her mentor there was Dr. Jane Schoonmaker Rodgers. Prior to her doctoral work, Liz studied with Patricia Stiles at Indiana University.

​More information about Liz can be found at lizpearse.com. Liz belongs to Beyond Artists, a coalition of artists that donates a percentage of their concert fees to organizations they care about. She supports Planned Parenthood, Black Lives Matter, and various Midwest-based new music presenters.​